It’s with great pride that LE CARLINE communicates its double victory at BioFach 2010, in the international competition of organic wines: MUNDUSvini, one of the most prestigious and recognized competitions worldwide in the bio wine industry.

The Grand Prix MUNDUSvini BioFach International Organic Wine, sponsored by the Academy of Wine “MUNDUSvini Weinakademie Internationale” is a competition held in Germany for organic wines from all production areas of the world. The Rosso Carline is made from selected bunches of Cabernet Franc, Merlot e Refosco dal Peduncolo Rosso, whereas the Amicitia is produced by Chardonnay’s grapes. The first one needs to mellow, at least two years, first in the barrels, then in barriques and finally it maturing in the bottle. It has a garnet red colour and a velvety and pleasantly bitter flavour.
While the second one it’s an elegant wine, it’s colour is straw yellow, it is slightly spicy and it ferments in small oak casks.

The evaluation was based on examining the olfactory and the taste of wines, as well as on individual allocation of points, in accordance with the lists of OIV ( International Organisation of Vineyard and Wine) and of UICE (International Union of Oenologists)

The jury asked to evaluate the wines are made by prominent professionals and competent in the tasting.

“This winning of LE CARLINE’s wines was particularly flattering because there were many organic wines in the race, over 480, mostly Italian.” – declares with satisfaction Daniele Piccinin – “Be rewarded at BioFach” – continues Piccinin – “the best show-case for the organic world, represents for LE CARLINE the possibility of stimulate the foreign trade and make known our quality. Moreover, this type of event, like the Italian Wine Week, from which we are recently returned, always represent a useful vehicle for discussion and debate among from producers, growers, importers and consumers.” 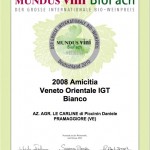 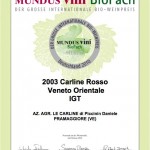